I am reading about x86-64 (and assembly in general) through the book "computer systems a programmer's perspective"(3rd edition). The author, in compliance with other sources from the web, states that idivq takes one operand only - just as this one claims. But then, the author, some chapters later, gives an example with the instruction idivq $9, %rcx.

Two operands? I first thought this was a mistake but it happens a lot in the book from there.

Also, the dividend should be given from the quantity in registers %rdx (high-order 64 bits) and %rax (low-order 64 bits) - so if this is defined in the architecture then it does not seem possible that the second operand could be a specified dividend.

Here is an example of an exercise (too lazy to write it all down - so a picture is the way to go). It claims that GCC emits idivq $9, %rcx when compiling a short C function. 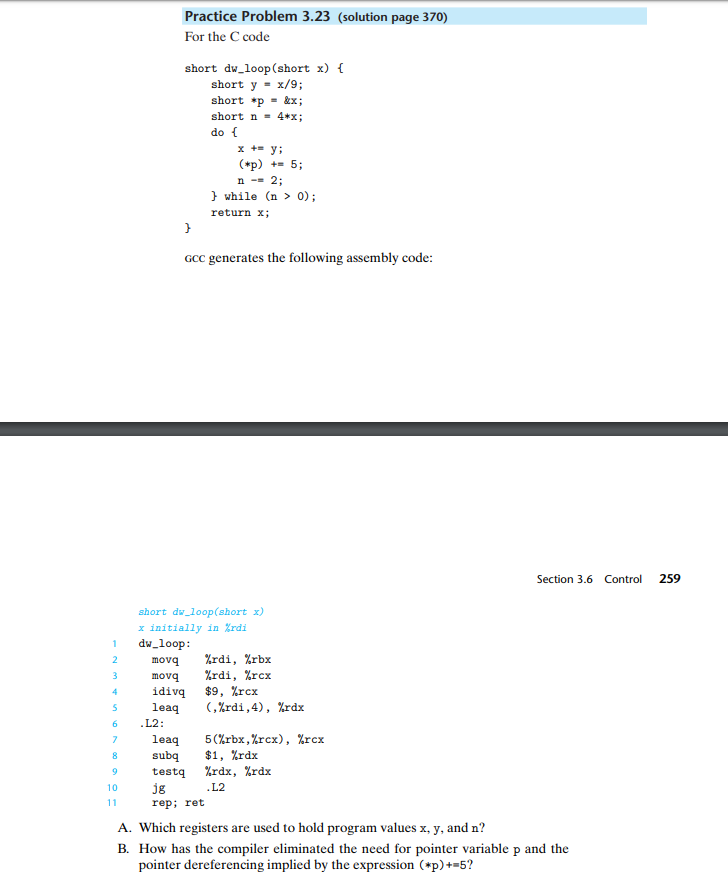 That's a mistake. Only imul has immediate and 2-register forms.

mul, div, or idiv still only exist in the one-operand form introduced with 8086, using RDX:RAX as the implicit double-width operand for output (and input for division).

Or EDX:EAX, DX:AX, or AH:AL, depending on operand-size of course. Consult an ISA reference like Intel's manual, not this book! https://www.felixcloutier.com/x86/idiv

Also see When and why do we sign extend and use cdq with mul/div? and Why should EDX be 0 before using the DIV instruction?

x86-64's only hardware division instructions are idiv and div. 64-bit mode removed aam, which does 8-bit division by an immediate. (Dividing in Assembler x86 and Displaying Time in Assembly has an example of using aam in 16-bit mode).

Of course for division by constants idiv and div (and aam) are very inefficient. Use shifts for powers of 2, or a multiplicative inverse otherwise, unless you're optimizing for code-size instead of performance.

CS:APP apparently has multiple serious x86-64 instruction-set mistakes like this, claiming that GCC emits impossible instructions. Not just typos or subtle mistakes, but misleading nonsense that's very obviously wrong to people familiar with the x86-64 instruction set. It's not just a syntax mistake, it's trying to use instructions that aren't encodeable (no syntax can exist to express them, other than a macro that expands to multiple instructions. Defining idivq as a pseudo-instruction using a macro would be pretty weird).

e.g. I correctly guessed missing part of a function, but gcc generated assembly code doesn't match the answer is another one where it suggests that (%rbx, %rdi, %rsi) and (%rsi, %rsi, 9) are valid addressing modes! The scale factor is actually a 2-bit shift count so these are total garbage and a sign of a serious lack of knowledge by the authors about the ISA they're teaching, not a typo.

Their code won't assemble with any AT&T syntax assembler.

Also What does this x86-64 addq instruction mean, which only have one operand? (From CSAPP book 3rd Edition) is another example, where they have a nonsensical addq %eax instead of inc %rdx, and a mismatched operand-size in a mov store.

It seems that they're just making stuff up and claiming it was emitted by GCC. IDK if they start with real GCC output and edit it into what they think is a better example, or actually write it by hand from scratch without testing it.

Presumably they didn't want to talk about Why does GCC use multiplication by a strange number in implementing integer division? and replaced that block of code with their made-up instruction. From context you can probably figure out where they expect the output to go; perhaps they mean rcx /= 9.

The rest of CSAPP would have to be pretty amazing to make up for these errors and make the textbook worth using. I'm not familiar with it at all, but I wonder if it used to be good in earlier editions but porting it to x86-64 introduced a lot of errors. (If older editions were maybe 32-bit x86).

How a hypothetical idiv reg, reg or idiv $imm, reg would be designed

Also, the dividend should be given from the quantity in registers %rdx (high-order 64 bits) and %rax (low-order 64 bits) - so if this is defined in the architecture then it does not seem possible that the second operand could be a specified dividend.

If Intel or AMD had introduced a new convenient forms for div or idiv, they would have designed it to use a single-width dividend because that's how compilers always use it.

Most languages are like C and implicitly promote both operands for + - * / to the same type and produce a result of that width. Of course if the inputs are known to be narrow that can be optimized away. (e.g. using one imul r32 to implement a * (int64_t)b).

Compilers always use xor edx,edx before DIV or cdq or cqo before IDIV to actually do n / n => n-bit division.

Real full-width division using a dividend that isn't just zero- or sign-extended is only done by hand with intrinsics or asm (because gcc/clang and other compilers don't know when the optimization is safe), or in gcc helper functions that do e.g. 64-bit / 64-bit division in 32-bit code. (Or 128-bit division in 64-bit code).

So what would be most helpful is a div/idiv that avoids the extra instruction to set up RDX, too, as well as minimizing the number of implicit register operands. (Like imul r32, r/m32 and imul r32, r/m32, imm do: making the common case of non-widening multiplication more convenient with no implicit registers. That's Intel-syntax like the manuals, destination first)

The simplest way would be a 2-operand instruction that did dst /= src. Or maybe replaced both operands with quotient and remainder. Using a VEX encoding for 3 operands like BMI1 andn, you could maybe have
idivx remainder_dst, dividend, divisor. With the 2nd operand also an output for the quotient. Or you could have the remainder written to RDX with a non-destructive destination for the quotient.

Or more likely to optimize for the simple case where only the quotient is needed, idivx quot, dividend, divisor and not store the remainder anywhere. You can always use regular idiv when you want the quotient.

BMI2 mulx uses an implicit rdx input operand because its purpose is to allow multiple dep chains of add-with-carry for extended-precision multiply. So it still has to produce 2 outputs. But this hypothetical new form of idiv would exist to save code-size and uops around normal uses of idiv that aren't widening. So 186 or 286 imul reg, reg/mem is the point of comparison, not BMI2 mulx.

IDK if it would make sense to introduce an immediate form of idivx as well; you'd only use it for code-size reasons. Multiplicative inverses are more efficient division by constants so there's very little real-world use-case for such an instruction.

I think your book has made a mistake.

idivq only has one operand. If I try to assemble this snippet:

I get this error:

but you probably already know that.

It may also be a macro (unlikely, but possible. credit to @HansPassant for this).

Perhaps you should contact the book's author so that they can add an entry to the errata.